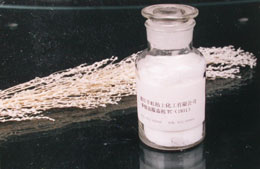 Specifications︰ SUPLITE RB is a type of Synthetic hydrotalcite (SYNTHETIC Layered double hydroxides) one of the compounds with the chemical formula [M(II)(1-X)M(III)X(OH)2]Y+(An-Y/n)¡Á mH2O (LDH-A), where M(II) are the cations of double-charged metals and lithium, M(III) are the cations of triple-charged metals, An - are interlayer anions. The structure of these compounds is formed by alternating charged brucite-like layers of the composition [M(II)(1-X)M(III)X(OH)2](2¥ )Y+ and the layers containing A- anions and water molecules at the same time. The presence of two fragments of nanoscale thickness which differ sharply in composition, structure, and chemical properties makes it possible to employ these compounds as nanoreactors for chemical reactions of interlayer molecules. The chemical reactions of interlayer molecules can be conventionally divided in two groups. The first group includes reactions in which two-dimensional [MXM(III)1-X(OH)2]qX -3X +1 layers are conserved after reaction of interlayered molecules. The second group includes reactions in which two-dimensional layers are destructed. For Li-Al double hydroxides [LiAl2(OH)6]NX¡Á mH2O as an example, various reactions of interlayer molecule of the first type are considered: polymerization of aminobenzoic acid anions, in-layer formation of transition metal complexes [Medta]2- and [§®nta]-, etc. It is demonstrated that the rate of chemical transformations depends on a series of factors including the character of the mutual positions of molecules in the interlayer space, types of molecular contacts between them, rates of reagent transport into the interlayer space.